The 22nd Vasant Valley School Debate for the India Today Cup was held on the 7th, 8th and 9th of October, 2020. One of the most awaited events in the debating calendar of schools in India, the debate drew participants from schools all across the country and even borders. This year being the year of the ‘New Normal’, students from over thirty five schools engaged in meaningful discussions on issues pertaining to socio-economic and political domains on a virtual platform.
After three consecutive days of feisty rounds of debating, the final one was between Vasant Valley School, New Delhi, and Lahore College of Arts and Science, Lahore.
The theme for the final round was “Media”, and the motion settled upon was “This House Supports the crowdsourcing of news via social media”, with Vasant Valley proposing the motion and LACAS opposing it. Throughout the course of the debate, each side put forth valid arguments which were immediately rebutted by the other. It was an incredibly engaging debate that had kept everyone on tenter hooks. The live streaming on Youtube further propelled the debate to reach out to a wider audience.
Although both sides had rational and logical case lines, there could only be one victor. In a split decision, Lahore College of Arts and Science, Lahore won by the tournament.

Click here to view the recording of the final round 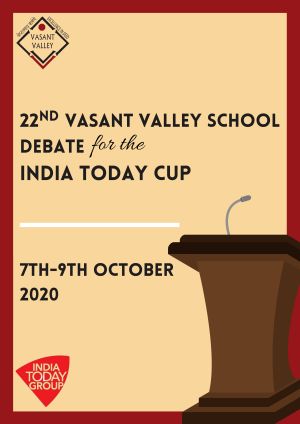